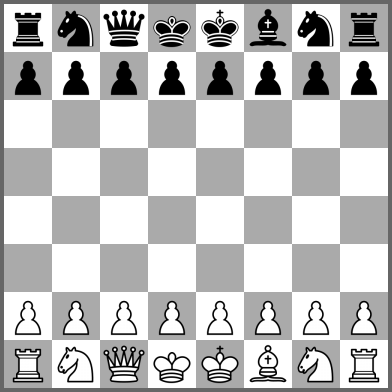 Chess variant with two kings on each side, but only one of them is active at once (i.e. subject to the check-rule), depending on their position.

It must not move into check, it must escape from check, and if it gets checkmated, that player loses.

An ordinary piece subject to capture.

The active king is always the one which is:

If they move in such a way that their relative position swaps, then their roles exchange. This move is legal if the new active king does not get into check, but it does not matter if the previously active king is in check.

If the non-active king is captured, the only remaining king becomes permanently active.

Switching example 1: the active king moved to the same file as the other king, so the king closer to the back rank became active.

Switching example 2: the non-active king moved towards the h-file, so it became active.

The active king has to move out of check. It does not matter that the other king is in check, or it is exposed to check.

The active king can move to fields where it is not in check, but it can also move such that it loses royalty, after which it does not matter anymore whether it is in check.

White seems to be in checkmate. However the other king can make a move such that it becomes active, so the king in checkmate loses royalty, and the position will be legal.