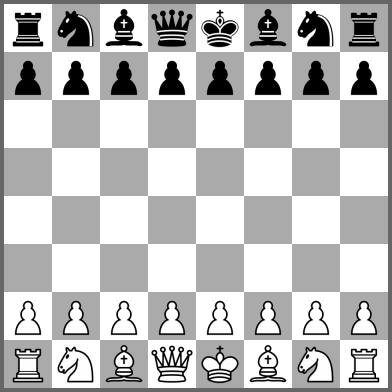 Chess is a two-player, zero-sum, perfect information game. The game is played on a board with 8x8 squares. The game starts with 16 white and 16 black pieces on the board, in the arrangement above (initial position). One player (White) controls the white pieces, and the other (Black) controls the black pieces.

White moves first, Black moves next, then White moves again, and so on. Turns cannot be skipped: the player must move on his or her turn. If no legal move is possible, the game finishes. The result of the game and other type of ends are described later.

1.1. Movement of the pieces

Moving means that the player places one of his or her pieces on the board to an other field, according to certain rules. That field may be empty, or may be occupied by an opposite-coloured piece, which is then removed from the board – this is called capturing. The players cannot capture their own (same-coloured) pieces.

1.1. Movement of the pieces

Each piece type has its own movement rules.

The rook can move any number of fields along orthogonal lines (horizontally or vertically) until an other piece or the edge of the board is reached.

The bishop can move any number of fields diagonally, but also cannot leap over other pieces.

The bishop always remains on its original field colour, either light or dark. The two bishops of one side start on different field colours, so they can never meet.

The queen combines the power of the rook and the bishop: it can move any number of fields in eight different directions (but also cannot leap over other pieces).

The knight moves two fields in one orthogonal direction, and one field in the other, as can be seen on the diagram. It leaps, i.e. it can move even if other pieces block its path (the only exception is when the target field is occupied by a same-coloured piece).

The knight changes its field colour on each move.

The king can move to any of the eight adjacent fields (or five on the edge of the board, and three in the corner).

Pawns can move only in their own direction. Opposite-coloured pawns move in opposite directions, to the side of the opposing player.

The pawn moves differently when it captures and when not: if it simply moves without capturing, it can do this by moving one field orthogonally forward, or can also move two fields from its initial position (if the intervening field is empty). The pawn can capture diagonally forward (forward-left or forward-right).

A player is said to be in check if the opponent would be able to capture this player's king. Players cannot make a move that puts or leaves their own king in check.

The white king can move only to the three fields marked by blue dots, because on the others, it would be in check from the rook or the king.

The bishop cannot move, because it would expose the king into check.

Castling is a special move that involves two pieces at once: the king and one of the rooks. The move exchanges the order of the two pieces on the back rank as if they jumped over each other. It is performed in the following way: the king moves two fields towards the rook, and the rook jumps over the king and moves to the adjacent field (to the field which the king has crossed). Castling is allowed only if the following conditions are met:

Both sides before and after castling

When a pawn reaches the opposite side of the board, it promotes to an other piece of the same colour except king: queen, rook, bishop or knight. The choice is up to the player making that move, and is not restricted to the captured pieces, so a player can have two queens, three rooks etc. at once. The most common choice is naturally the queen.

Pawn before and after promotion

Pawns have an other special move: the en passant capture. It can happen when a pawn makes a double move; then an opposing pawn can capture it on the very next move as if the first pawn moved only one field. Later this possibility is lost.

When the player on turn is in check and cannot make a valid move, is called to be in checkmate. In this case the game ends, the checkmated player loses, and the opponent wins. For example:

A player may decide to resign when it seems to be inevitable to be checkmated sooner or later. Then the game ends and the other player wins (but at least the resigned player does not have to wait until the checkmate).

The result of the game can also be a draw, which means that neither player wins. There are five cases when the game ends in a draw:

These notes are not about the rules of chess, but about other aspects of the game, or about strategic considerations. These are used as a reference for other chess variants on this site, which describe the difference from these information.

Pieces are often assigned numbers to indicate how valueable they are. These help determine when does it worth exchanging some pieces with others. A common valuation is this:

These are not exact, but estimated, averaged values. The value of a piece is heavily dependant on the concrete position.

The king does not have a value as it cannot be captured.

According to these numbers, bishop and knight has the same value, but in most positions the bishop is a bit more valueable. Bishops have more value in pairs. Knights are more valueable in closed positions.

The value of a pawn is very sensitive to its position as pawns move slowly. Double or isolated pawns usually worth less, but pawn chains defending each other worth more. Passed pawns, i.e. pawns with no opposing pawns preventing them from promoting, worth significantly more.

We enumerate the most basic piece setups against a lone king and show which one is enough to checkmate it.