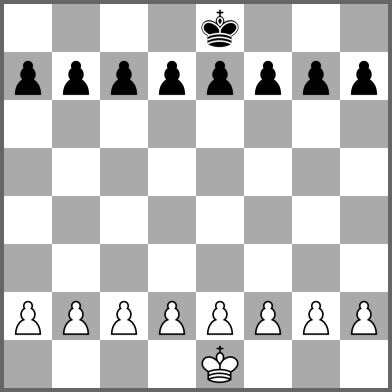 Chess variant where players move twice per turn, and there are only pawns and kings. In the very first turn, White moves only once.

The black pawn can capture the white pawn in one turn, in two consecutive moves.

The pawn can capture the king in two consecutive moves. Black wins immediately after the first move.

The king can capture the pawn in the first move no matter it is protected, since the king can move back to its original field (or to an other field) in the second move.

No matter White is in check, that pawn move is legal in the first move, since escaping from check is only neccessary in the second move.