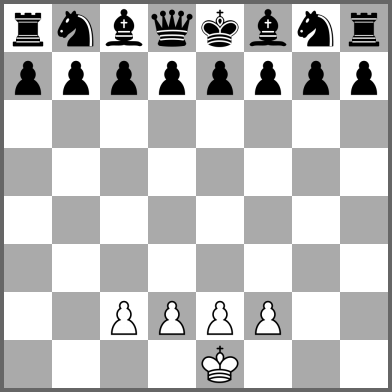 Chess variant where White has only king and some pawns, but moves twice in each turn. Black has the usual set of pieces, and moves only one in each turn.

The number of white pawns is four by default, but it can be changed.

For defeating White, Black has to control not only the usual 3x3 square around the white king, but a larger, 5x5 square. That is why the white king is called monster.

White almost certainly wins after promoting a pawn, but it is not neccessary. White can even win without any pawns if the white king approaches the black king, and it has no time or space to escape.

The king can capture the pawn first, then the rook. It does not matter that the pawn is protected, only the rook matters.

White wins after moving the king one square towards the black king (on the first move), because it can capture the black king on the second move. The king can always capture the opposing king, even if that would put itself into check. Therefore, the black king needs to avoid the 5x5 big square aroung the white king.

An other checkmate from black.