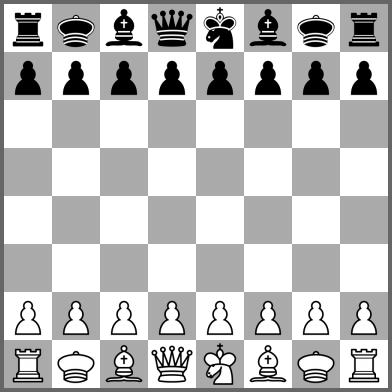 Chess variant where the role of the king and knight is exchanged: players win by checkmating the knight, and the kings are regular pieces subject to capture.

Starts on the field of the king. It moves like a knight, but the check-rule applies to it like to a king: it cannot move into check, it has to move out from check, and if it cannot escape from check, it is an immediate loss of the game (checkmate).

They start on the fields of the knights. They move like the king, but the check-rule does not apply to them, i.e. they can be captured like any other piece.

The following table shows which pieces or piece combinations can checkmate the lone knight.

The queen can checkmate the knight on its own, but neither of the other pieces can (not even with the support of the knight). However, any two pieces (besides the knight) can checkmate (except the very rare case of two bishops on the same field colour).