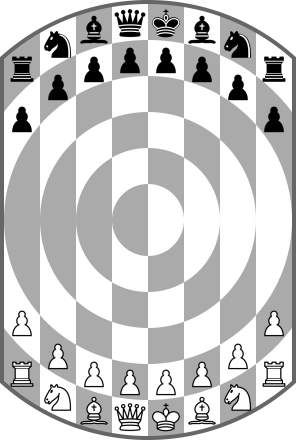 Chess variant on a strange, distorted chessboard. Pieces move in unusual ways, they bend and make U-turns near the center.

The board contains 64 fields like the normal chessboard. All fields has four sides and four corners like on the normal chessboard – except the two half-circle center fields. In order to make this statement true also for these fields, imagine a new corner in the center of the board, so that these two central fields have not two but three common corners.

Pieces sometimes move differently than expected, unless we understand what "orthogonal" and "diagonal" directions on this board mean.

The rook moves in "orthogonal" directions. "Orthogonal" means that when a rook arrives to a field it will leave it on the opposite side. This means that the rook turns back in the middle of the board and arrives to the same side it came from. On the middle fields if the rook moved on the direction that is geometrically straight, that would not be "orthogonal", because then the rook would leave the field next to where it entered.

The bishop moves "diagonally". "Diagonal" here means that when a bishop arrives to a field it will leave it on the opposite corner. These diagonal directions bend around the middle and meet finally. Therefore the bishop can reach some fields from two different directions at the same time.

The queen combines the power of the rook and the bishop as usual.

The king can simply move to an adjacent field (by edge or by corner).

The knight's movement is the most complicated on this board. It follows the "two in one way and one in the other" rule, but these directions are "orthogonal", i.e. rook-like moves, which can bend away from the geometric straight. If the rule above leaded to an adjacent field, then it is not allowed (this can happen in the center).

Pawns do not follow the above rules for "orthogonal", instead they move forward to be able to reach the other side of the board. They capture however "diagonally" forward, i.e. in bishop directions, left or right from forward. As it can be seen on the diagrams, capturing is sometimes like it were moving two fields forward. This type of capture is however not allowed on the shortest files (so the rook pawns in the initial position cannot capture each other). Capturing is sometimes a horizontal movement when the pawn is in the central line (but this is also a "diagonal" direction).

Pawns can first move two or three fields as long as they do not reach the central line with this move. So the two central pawns can move three from their initial field, the next two can move two, and the others only one. If a central pawn have already moved one field, then it can still make a double-move from there.