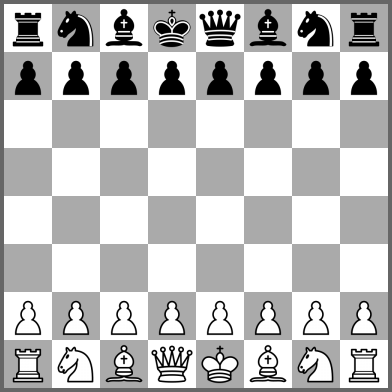 List such gamesTry the rulesChess variants with different initial positions

Chess variant where the black queen and king has reversed initial position compared to white.

Instead of reflectional symmetry this setup has rotational symmetry, so both players see the pieces in a similar way: king starts on the right side.

The kingside of white and black are different. Because castling happens mostly on the kingside, this initial setup results the two kings ending up in the opposite corners of the board. Therefore there is an advantage for both players to attack on its own queenside and defend on kingside. Such games occur in standard chess when one player castles to kingside, the other castles to queenside.