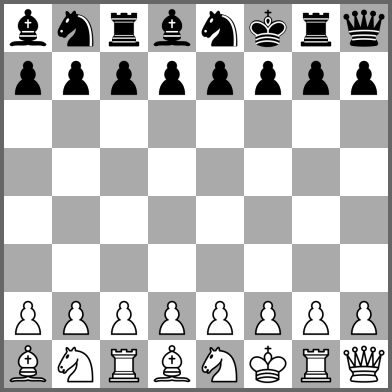 List such gamesTry the rulesChess variants with different initial positions

Chess variant where the initial position of the pieces is shuffled on the back rank.

The order may be random or set up explicitly with some limitations. See image above as an example.

Rules for the initial setup

White and black pieces mirror each other, like in chess. Other limitations has to be met:

The number (960) is the number of the possible initial setups. Some examples:

When castling, the pieces end up in the same position as they were after castling in standard chess. In some cases it is possible that the king or the rook does not move during castling (when it is already at its destination). In some other cases they just swap position. Examples:

On queenside, both pieces move in the same direction.

On kingside, the rook stays in one place.

On queenside, the king stays in one place.

Castling is possible with the usual constrains:

Every possible initial setup has a parameter, a number between 0 and 959. This number is visible during the game, and if we want to start with a specific setup (rather than random setup) we can set this number on the New game page.

Bobby Fischer, 1996 – though earlier there were similar, but less restrictive variants[wiki]