In four-player chess every player moves differently coloured pieces. On this site these four colours are yellow, green, red and blue.

The four players form two teams: yellow with red and green with blue. The two teams play against each other. 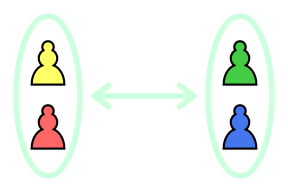 This page describes the general rules of four-player chess. It does not cover the shape of the board and the movement of the pieces because there are many possibilities (see: Four-player chess variants). Here we illustrate the rules on an 8x8 standard chessboard, but those are also valid on all kind of boards.

All other rules not mentioned here can be found at: Rules of Chess.

Order of the turns

The players move in the following order: yellow, green, red and blue, then again yellow, and this order repeats. This means that the two teams have turns alternately. 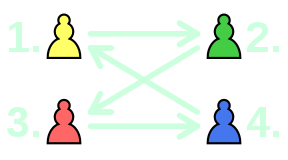 Teammates (allies) cannot capture each other's pieces (like a player can neither capture his or her own pieces). Instead of playing against each other their goal is to play together against the other team.

The teammates win or lose together, as a team.

A player is in check when there is another player who, if were to play next, could capture the first player's king. As allies cannot take each other's pieces check can be given only to a player from the other team. Players cannot make a move which results in being checked by the moving player, even when the player who could capture the king is not coming immediately.

The end of the game

In four-player chess allies win or lose together, as a team.

When the player on turn cannot make a valid move, the game ends. When this player is also in check (so checkmated), this player's team loses (gets 0 points), and the other team wins (gets 1 point). The allies are not differentiated, they both share in winning or losing, no matter who is actually checkmated or gave checkmate.

The Red-Yellow team won over the Green-Blue team (to be exact Red mated Blue, but that is indifferent for the results).

The Green-Blue team won over the Red-Yellow team (Yellow, but that is not important). Note that the green and the blue king can move next to each other as they are teammates, and cannot capture each other.

Yellow checked the blue king. Were Blue the next player this would be a checkmate. However, the next player after Yellow is Green, who can interpose the bishop. If Green does so, then after Red's move Blue comes, who is not in check, but cannot make a valid move, so the game ends in a draw by stalemate (½-½). But Green is not forced to interpose the bishop as not being in check. If Green makes the mistake not to do this, then after Red's move Blue will be in checkmate, and the Green-Blue team loses the game (1-0).

It is important that checkmate is only realized when the checkmated player is to move. Here it seems that Yellow checkmated Blue. But the game does not end here, as after Yellow not Blue follows but Green. Green can checkmate Red with the queen (Green is able to do this as Green is not in check). The next player is Red, who is checkmated and loses the game. The fact that Blue is also checkmated does not count as Blue's turn did not come yet.

Even when we adhere to the check-rule, positions can arise when the king could be captured. For example:

If Green moves away the bishop, Yellow becomes checked. Yellow however does not have a chance to defend the king because after Green comes Red (who is also helpless), and thereafter comes Blue, who can capture the king. In such cases the Green-Blue team wins immediatelly (when Blue's turn comes).

This is similar to the previous position, but here it is Red's option to move the bishop, who is Yellow's ally. According to the rules Red could do this as Red would not become checked. However it would be a big mistake, as then Yellow would have no chance to escape the check as Yellow's turn is after Blue's, who could capture the king, and the Green-Blue team would won.

In a hopeless situation a team can resign the game, which means that one player makes a resign request, and the teammate accepts it.

The game can also end in a draw similarly to standard chess. When a draw happens both teams (all four players) get 1/2 points. The fifty-move rule applies to fifty rounds, so fifty times four moves altogether.